The Forbidden Fruit that Kills Relationships

It’s hard to pick the forbidden fruit if you’re 200 yards away, but it’s pretty easy if all you have to do is reach up.

Do you know why stores have candy in the checkout lane? They know that when you put temptation and arm’s length people are more likely to give in to temptation. The stores put the sweet stuff right where you have to see it. Those magazine covers with enticing headlines about gossip and sexuality appeal to your need to know and those sweets appeal to your need to eat. They don’t typically put The Economist or the American Journal of Nursing in the checkout lane. They put the National Enquirer, Cosmopolitan, and Sports Illustrated (the little swimsuit issue) there.

Too Tired to Resist Temptation

Willpower is like a muscle that fatigues with use. 40 minutes in Walmart will fatigue anyone and by the time you’re done you want to reward yourself for the pain you’ve had to endure.

A study in 2012 revealed Supermarkets sell about $5.5 billion of food, drinks, and other products from checkout each year (FMI, 2012).

Other studies have found that after making a series of decisions, such as choosing among the 30,000 to 50,000 items in a supermarket (Sorensen, 2009), people are more likely to make choices against their best interests (Bruyneel, 2006; Baumeister, 2002). Willpower is like a muscle that fatigues with use (Cohen, 2012a).[1]

The last stop you have to make is the checkout with kinds of temptation right in front of your eyes and at arm’s length.

Sowing the Seeds of Mistrust

This appears to be what happens to Eve. She is at the checkout stand and the salesy serpent is saying, “What a delicious piece of relationship destroying fruit?” Except he dresses up the fruit as something other than what it is – it is the way to real knowledge, it will help you see better, it will open your eyes.

Look at what the serpent does.

4 “You will not certainly die,” the serpent said to the woman. 5 “For God knows that when you eat from it your eyes will be opened, and you will be like God, knowing good and evil.”

Have you ever been sold a bill of goods?

To be sold a bill of goods means to be sold something of no value by dressing it up and making it sound like a good deal. That’s what happens in this passage. The serpent sowed seeds of mistrust into Eve’s mind about God.

The Bullet that Kills Relationships 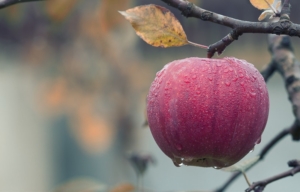 Mistrust and the Forbidden Fruit

Mistrust is the bullet that kills a relationship. By placing temptation at arm’s length, the temptation became large and Eve’s relationship with God became small.

When temptation looms large and when it’s appealing, we open ourselves up to deception. We begin to listen to lies like “I probably can’t trust ______________, or they don’t really care about me, or they don’t have my best interest in mind.”

Father, the world seems to tell me that I need this and that. It whispers temptation my way. And sometimes my own desires do the same. Help me to be discerning and to see your truth! In the name of Jesus, Amen.